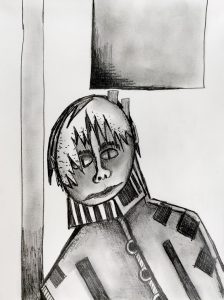 Billy is huge, meaty, and psychopathic. He wears camouflage shorts with a dozen hand grenades at his belt. His father Hiram, coach of the team, is an ineffectual, dreamy art gallery owner who started the Junior Dropout Basketball League with his wife Madeline, director of the Bolamme Center for Hurt Feelings.

Raging at insults from the announcers, Billy throws a basketball through their glass booth, injuring Dan. When a backup player crosses him, Billy gives him one of his grenades along with a request to sneak a beer out to the court. As Billy scores sixty-six points in a row, a muffled explosion signals Wally Raphael’s death in the locker room.

Before a game at Baltimore with the Bazookas, Billy plants five Billy Bolamme Supreme basketballs by a natural gas line in the Dreamsong Arena basement. He starts the game with 450 points in a row, but at 498, he misses a three-pointer and rages at the crowd.

Frank Chester, announcing in the absence of the injured Dan Ryder, ridicules Billy’s resulting temper tantrum over the P.A. system. Billy batters Chester, ties him up, and leaves him to stare at two hand grenades wirelessly connected to Billy’s basketball. When Billy goes to the court and completes two baskets, Chester’s booth explodes. Then, to eliminate all witnesses, Billy triggers the Billy Bolamme Supreme basketballs stored in the Dreamsong basement by the gas lines.

One week later, Dan Ryder interviews Hiram, but before long they’re arguing about Jonathan Mueller, the crippled lone surviving witness of the Baltimore disaster, who’s given testimony about Billy’s involvement in the murder of ten thousand Baltimore fans.

In Maine a month later, in a televised game against the Plattville Hoods, Billy starts at 984 points scored in a row, then gets to 999 and misses a final free throw. After arming his Billy Bolamme Supreme, he leaves the arena and goes across the street to wait.

One more week passes, and Ryder interviews Billy before a game. They discuss Billy’s international fame and the twenty thousand people killed in the Plattville explosion, which Billy attributes to people trying to assassinate him. Then Mongar Frederick of the Plattville Homicide Bureau enters the radio booth, advising Ryder to play commercials for several minutes while he asks some hard questions.