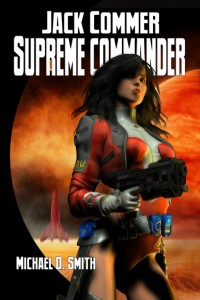 With the shocking suicide of the Typhoon I, the most powerful military spaceship ever built, the four Commer brothers are reduced to two. After the horrors of the Final War, the evacuation of Earth, and an unexpected conflict with native Martian terrorists, is eldest brother Jack really fit to lead the United System Space Force?  Yet despite stress bordering on hysteria he always seems to come up with the proper solution. Shy with women but easy with command as opposed to his passionate, guilt-ridden brother Joe, when promoted to Supreme Commander Jack passes over numerous ambitious admirals and holds onto power for decades with the newest rejuvenation technology. But has he ever really recovered from the responsibility of overseeing forty years of futile time war with the Alpha Centaurians?

Trip to Mars, the Picture Book

Origins of the Jack Commer Series